Dangers and diseases can come to your flock from a variety of sources including insects. Spring rains and warm, humid weather across some Central, Northern and even Southern states have led to an increase in mosquito and black fly populations.

This week in Iowa, several flock owners have seen chicken deaths after swarms of the black flies, or gnats, have attacked their flocks. The Iowa Department of Agriculture and Land Stewardship (IDALS) tells us that an investigation was done on backyard chickens this week with sudden death loss, and the USDA FADD reported there had been swarms of ‘gnats’ all around the chicken. The necropsy revealed several black flies in the oropharyngeal cavity and trachea. Reports of gnat swarms and possible related poultry deaths have also appeared in Iowa online poultry groups over the past few weeks.

In April, the International Society for Infectious Diseases released an alert stating that livestock producers in the Arkansas delta were working to protect their animals after a population explosion of black flies was blamed for the deaths of a bull and cow and the closure of a nature center. Other states from Maine to Louisiana have also reported black fly problems. 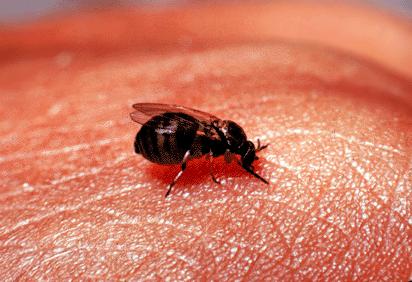 Black flies — also known as a buffalo gnats or turkey gnats — are small, rounded flies measuring barely an eighth of an inch in length. Black flies often attack in swarms, and livestock and chickens can actually die from bites, so keeping them away from your flock is a priority. Deaths from these swarms are due to acute toxemia and anaphylactic shock caused by toxins introduced within black fly saliva. They can also transmit leucocytozoonosis (see Merck: Leucocytozoonosis in Poultry) to poultry.

Male black flies feed only on the nectar of flowering plants, but the females seek blood to nourish their developing eggs. Unlike mosquitoes that breed in stagnant water, black flies can breed in virtually any flowing water — often fast-moving creeks and rivers. This makes control extremely difficult because running water is often some distance from poultry flocks and livestock. Adult flies will travel ten or more miles in search of blood.

Black flies like warm, humid weather and are attracted to the carbon dioxide exhaled by people and animals, as well as perspiration, fragrances or dark, moving objects. They are most active just after sunrise and before sunset on calm days. Avoiding infested areas at these times is the best means of prevention.

Black flies rarely enter shelters. Protect your chickens, ducks, geese, turkeys and other poultry from black flies by keeping them cooped. The flies can pass through tiny spaces, so covering coops with screens of 24 mesh per inch (2.54 cm) or smaller is needed. Consider using fans as air movement will help to deter the flies. Spray permethrin aerosol inside crevices and in the areas of gnat activity. The spray is an insecticide so will kill the gnats using chemicals, so be sure to read the label regarding use around animals.

Unfortunately, using pesticides for black fly control often has limited success. In some situations, liquid residual pesticides may be effective when applied to surfaces where flies land. Below are a few options to try if securing your flock in their coop isn’t enough:

We reached out to a few experts for their advice on controlling the black flies (buffalo gnats). Poultry expert and author Gail Damerow confirms recommendations to keep flocks cooped and secure up openings. “Aside from confining poultry indoors, with fine mesh screens covering openings and a running fan to keep air circulating inside the coop, not much else can be done but wait the several weeks until the black flies naturally abate,” says Damerow. Yuko Sato, DVM, MS, DACPV at Iowa State University VDPAM/VDL Poultry Extension and Diagnostics says, “According to some papers published with similar outbreaks, various pesticide type products such as Permectrin II and Ravap may also be used directly on birds to help repel biting black flies (Jones, et al. Avian Diseases, 59:24-30, 2015). In addition, other cofactors producing stress such as concurrent diseases and environmental factors (bird movement, heat, etc.) can also increase mortality rates.

We have listed the resources below for more information: