Krista Little has been raising chickens for her state fair for about seven years, and has had several flocks over the years. She currently has a small flock of chickens consisting of Delaware, Cinnamon Queens, and several other varieties.

Krista started raising chickens when she was 14 years old.  She purchased some of her early stock as day-old baby chicks from Murray McMurray Hatchery in a group order through her local FFA chapter.  Krista also purchased hatching eggs from McMurray Hatchery so that she could incubate and hatch her own chicks.

For five years in a row, Krista has shown her chickens at her state fair. She has shown Buff Orpingtons, Ameraucanas, Rhode Island Reds, and other breeds.

Twice, as a junior and a senior, she won Grand Champion for fit and show. Having received a positive recommendation from her poultry science teacher, Krista will be serving as a FFA poultry judge at the state fair for the first time this August.

Krista has been enrolled in college at the University of Idaho. She plans to complete her education there and either become a poultry veterinarian, or obtain her Master of Agriculture in Poultry Science. 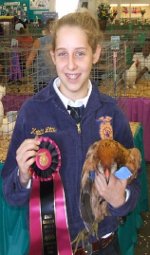 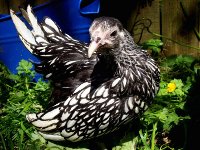