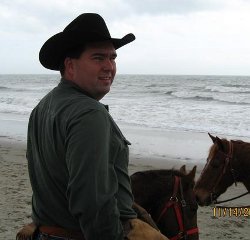 Chad Sale has been farming in North Carolina, and has raised poultry most of his life. He currently raises about 700 chickens, ducks, turkeys, and quail.

As a child, Chad used to spend a lot of time on his grandparent’s farm. Chad’s great-uncle, who lived nearby, raised chickens commercially, and when Chad was three years old, he would ride on the egg cart through the chicken houses and help gather the eggs. Chad said that he figures that’s how he first got interested in raising poultry. When Chad was six years old, his grandmother helped him get started raising his own flock. 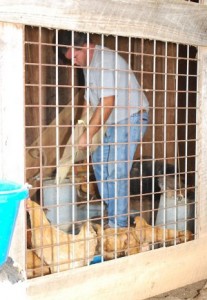 Now Chad sells both eggs and baby chicks to the local market. He said he never has any trouble selling what he produces. Starting in the Spring, Chad hatches 100 to 150 chicks each week. He maintains his own breeding stock, which consists of 25 Buff Orpingtons, 15 Pearl White Leghorns, 15 Brown Leghorns, 15 Barred Rocks, and 10 Rhode Island Reds. Chad originally purchased much of his breeding stock from Murray McMurray Hatchery. “McMurray’s stock is sometimes a little bit more expensive than stock from other hatcheries, but it is always of the utmost quality. I’ve never had a problem with McMurray stock,” Chad said.

Chad also raises horses, hogs, and about 40 head of cattle. In addition to farming, Chad has his farrier’s certification and shoes horses. In our interview, Chad said, “you can make a living farming, but you just have to diversify.” 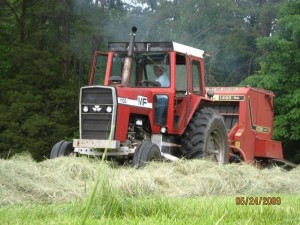 Chad raises hay for his livestock along with corn, and sometimes wheat. He’s not yet able to grow all of the feed needed for his livestock, but he does what he can. He also keeps a big garden. Any surplus produce or garden waste is used as feed for the hogs or other livestock. Chad said, “nothing goes to waste around here.”

Even more important to Chad than farming, is to make a difference in people’s lives. Chad likes to help people, and he believes it’s important for people to learn to grown their own food.

Recently, as a learning experience for young people in his church, he invited a youth group out to help him slaughter hogs. Chad also told me of a young, 14-year-old with a troubled past. He bought chicks from Chad a few months ago, and each week he contacts Chad to let him know how he and his small flock are doing. Raising poultry has given this young man something to do that not only keeps him out of trouble but is productive and is teaching him to care.