[This series is a diary of our experience with raising chickens for our home flock. To see all articles in this series, please visit Home Flock Series.] It seems like our cool/cold snap is over.  It’s 72°F outside today with a light breeze, and the weather forecast predicts warmer nights of 50°F and above with a warming trend over the next few days until we reach weather that is more typical for Central Texas this time of year.

Moving the Chicks to the “New” Brooder

Today, we moved the chicks outdoors to the homemade brooder on our front porch. First, we spread about 1-2″ of wood shavings across the floor of the brooder for bedding. The bedding absorbs moisture and manure, plus it is pleasant for the birds feet.  To make things a little more interesting for the chicks, we added a few handfuls of fresh grass clippings. The chicks seem to really enjoy being outdoors and having the extra space. When we first put them into the “new” brooder, they began scampering all around in it. Now that they’ve been in the brooder for a half hour or so, they’ve settled down a bit (for the most part).  Some are now preening themselves, others are eating.  Some are still running around in short fast bursts.

From the start, we’ve noticed some differences in the “personalities” of the different breeds, and some seeming differences among particular chicks.  The Buff Rocks are the most rambunctious.  They are full of energy and aren’t as easy to hold, since they try to squirm away so they can jump back down into the brooder with the rest of the chicks.  When the Buff Rocks are in the brooder, they often run and tumble over the other chicks.

The Easter Eggers are energetic also, but they are a bit more laid back than the Buff Rocks.  They don’t seem to mind being held, but that may be because they’re my daughter’s favorite, so they get handled more than any of the others.

The Turkens are somewhat calm much of the time, but they’re still fairly active.  They seem very inquisitive, but that may be partly due to their looks.  They tolerate being held fairly well but aren’t as content with it as the Easter Eggers.

The Partridge Rocks are the prettiest and the calmest of all, so far.  Their downy feathers are a deep reddish brown. As for being handled, they don’t seem to mind or enjoy it. We began adding Quik Chick to the chicks’ waterer today; however, for best results we recommend using Quik Chick starting from day one.  Quik Chick is a vitamin and electrolyte supplement that helps the chicks get off to a good start. It is yellow, has a granulated appearance, and dissolves easily in water. Following the instructions, we mixed it into the chicks’ drinking water at a ratio of one teaspoon per gallon of water.

We also kept the chicks’ original one quart waterer in place, since they were already familiar with it.  We left it full of plain water, for now, to give the chicks an alternative to the Quik Chick. We built the “new” brooder about 8-10 years ago. It is fairly simple but has a few improvements over the previous brooder we had built.

At night we secure the lid using large rocks and/or bungee cords.  We’ve raised several batches of chicks in this particular brooder and have never had a problem with predators, but if I were to build another one now, I would probably opt for 1/2″ mesh hardware cloth instead of poultry netting on the lid.  It is stronger and provides smaller openings than the poultry netting and would be more secure. 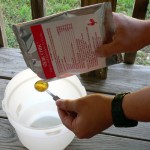