Starting a Homestead in Maine

Barbara has had a long-standing desire to start a homestead and raise livestock. She and her husband have four children, and they feel it is important to raise livestock and live on a homestead because of the skills and positive character traits that it teaches and imparts to their children. Besides that, they also feel that raising their own food is a way that they can become more responsible for what they put into their bodies.

When Barbara and her family first began raising chickens, they purchased seven Blue Laced Red Wyandottes. Their home is near a saltwater estuary, which acts as a habitat for eagles, and they soon lost much of their small flock to eagles. Other predators that are a problem in their area are raccoons and foxes. 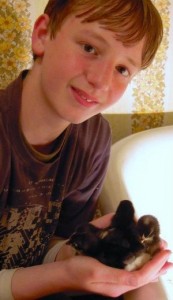 Barbara is thrilled to be starting a homestead, and looks forward to adding more livestock to build up her family’s homestead in the future. She plans to start raising a special, small variety of White Turkeys that are well suited to Maine’s cold winters, and she wants to begin raising rabbits and dairy goats.