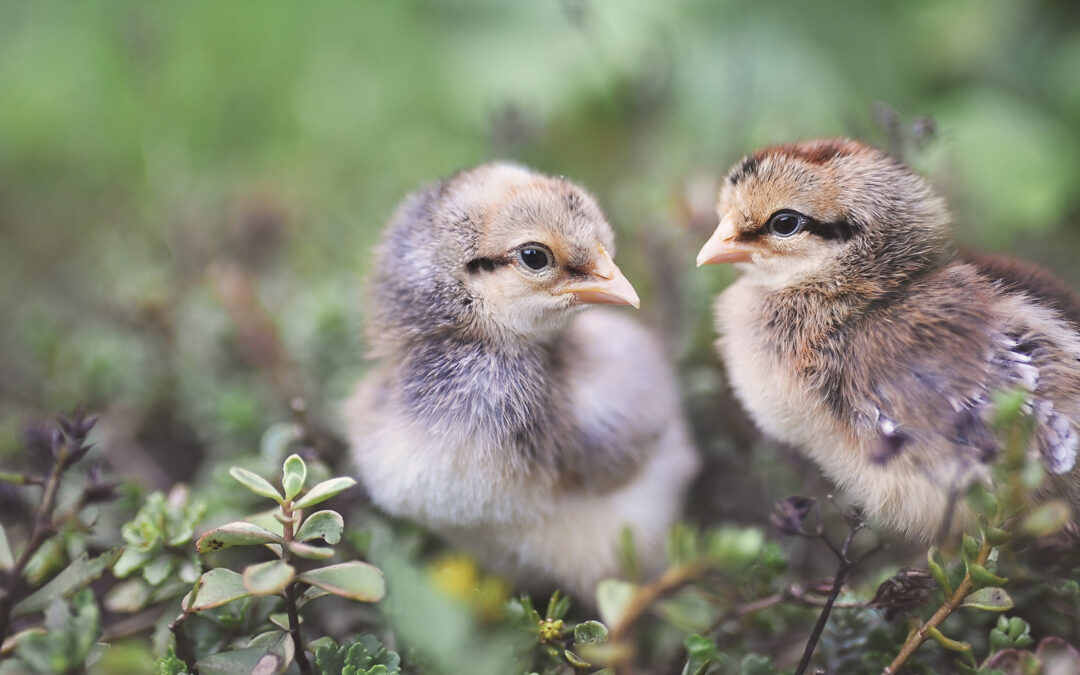 Off-grid living is on the rise, and so is chicken keeping! However, chicks purchased online or in a feed store need supplemental heat to keep them warm. So, how do off-gridders provide the necessary heat for keeping chicks warm? Here are my top 10 tips for brooding chicks off-grid.

Before we get into tips for brooding chicks off-grid, it’s necessary to know that in order for chicks survive and grow into robust adults, they must be kept warm. This means that during the first week of life, chicks need to be brooded between 90 to 95 degrees Fahrenheit. After the first week, the temperature within the brooder is decreased by 5 degrees each week. A chick does not require additional heat once it is fully feathered or when the brooder temperature matches the outdoor temperature. When chicks do not receive adequate heat, they can suffer serious long-term consequences.

Chicks that struggle to maintain their body heat tend to:

Generally, a heat lamp or heating plate is used to provide the necessary heat for chicks to thrive. However, if you provide them with an alternate adequate heat source and still maintain the proper temperature requirements, those items are not always necessary.

Keep in mind, the following tips are not only for off-grid living, but are also helpful for emergency situations such as power outages, especially ones that continue for long periods of time. We are stewards to our livestock, which requires us to be prepared for all circumstances.

Most hatcheries and feed stores begin shipping and selling chicks as early as March, and those who order chicks online will notice that a minimum order is required for shipping. Tom Watkins, President of McMurray Hatchery, took the time to talk to me about why a minimum order is needed during the colder months, and you can listen to our conversation here. 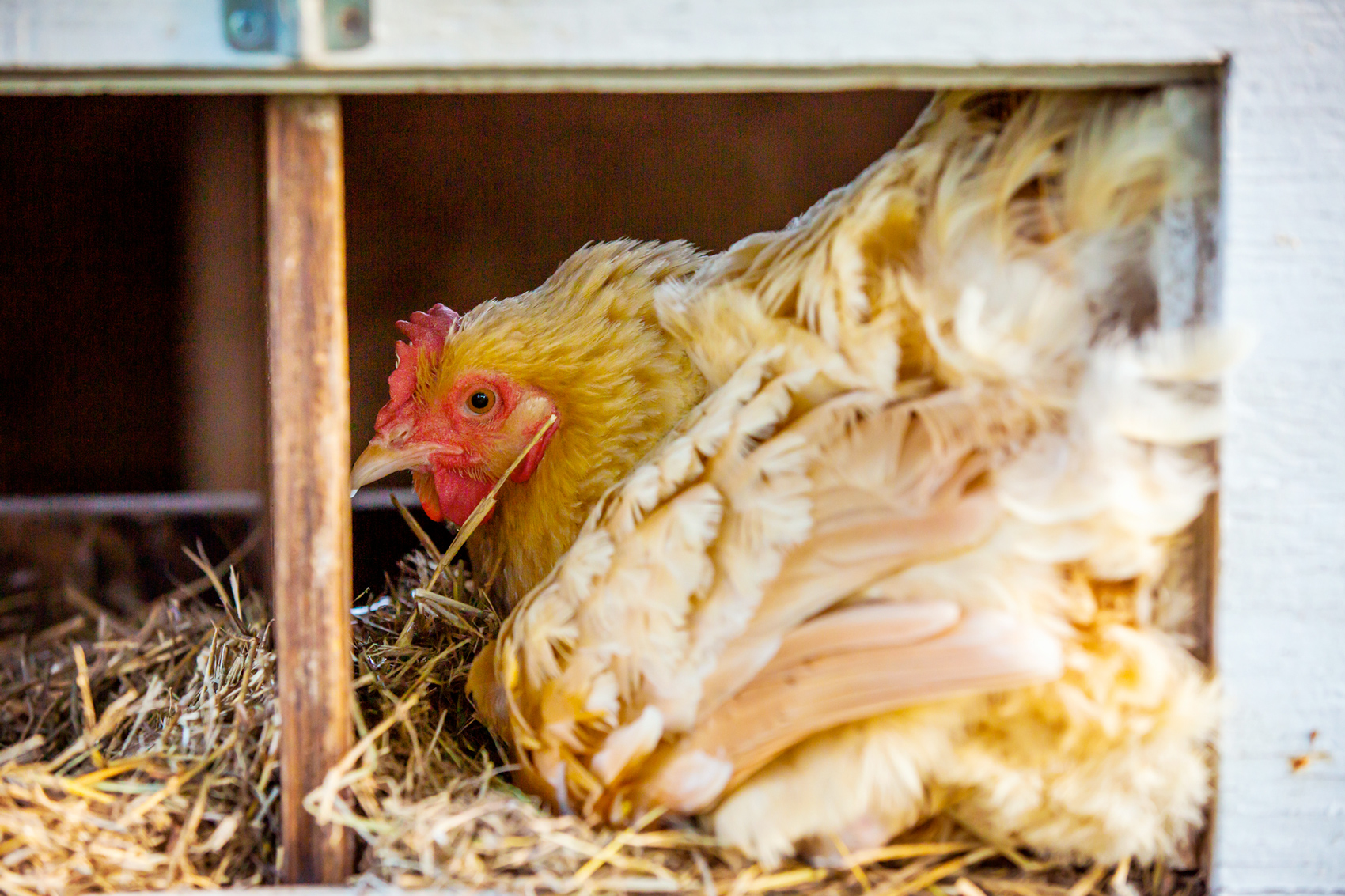 1. Utilize a Broody Hen Whenever Possible

A broody hen completely takes on the burden of providing heat for newly hatched chicks. Broody hens are the ultimate heat source for baby chicks, and are much more efficient than any other alternative available.

Ideally, if no fertilized eggs are available, one would simply give chicks to a broody hen. A good broody will take them without any hesitation, but not every broody hen will accept chicks that she didn’t hatch on her own. Make sure to have a back up plan in place if your broody hen rejects the chicks you are giving her.

If using a broody hen is not possible, it is your full responsibility to keep your chicks warm and comfortable at all times. Therefore, it is important to understand the body language of chicks. They can tell you exactly when they are too cold, too hot, or if the brooder is comfortable. Knowing their signs will help you to identify whether to provide more heat, or if you should minimize the heat being offered.

HUDDLED TOGETHER, CHIRPING LOUDLY
When chicks are huddled close together in a tight ball-like position, it indicates that the birds are extremely cold. By huddling, they are attempting to generate heat from one another.

SPREAD OUT AND AWAY FROM THE HEAT SOURCE, LETHARGIC, WEAK, PANTING OR BREATHING HEAVY
If a chick is laid flat with their wings away from their body, that generally means they are too warm.

CONTENT PEEPING SOUNDS, CHICKS EATING/SLEEPING/EXPLORING
Chicks that look casual, seem comfortable, and are eating and drinking regularly are content with the temperature of their brooder.

Also, make sure to have a thermometer on hand when brooding chicks off-grid. This will help you visually keep an eye on the temperature inside the brooder while you are reading your chicks’ behavior. 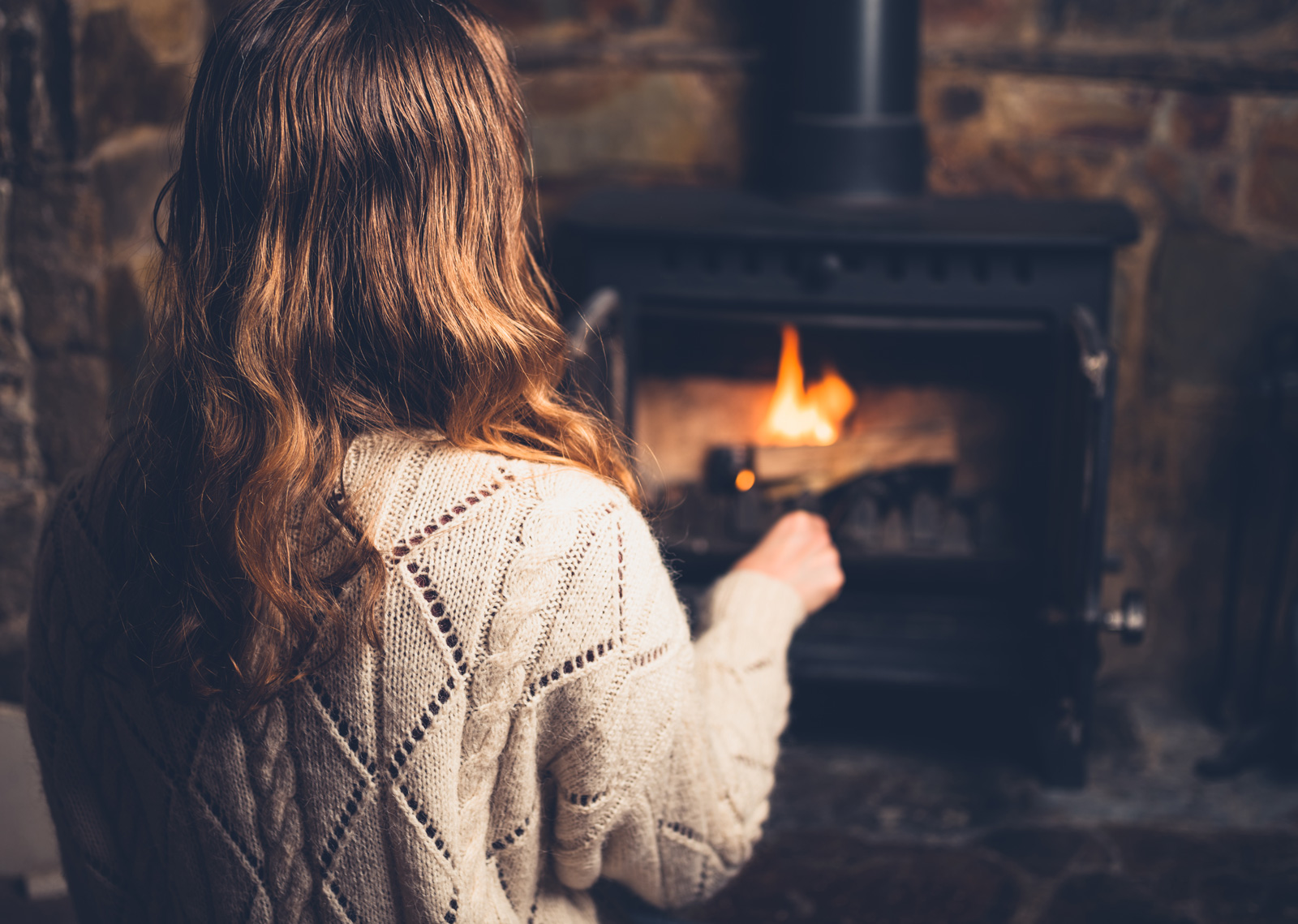 3. Use a Wood-Burning Stove

Wood stoves produce a substantial amount of heat. Therefore, if you are brooding off-grid, placing a brooder next to a wood stove is an excellent option. Make sure to place a lid over the brooder to ensure that the chicks cannot jump out and harm themselves. Placing a warm brick, smaller aluminum brooder, or hot water bottles into the larger brooder box provides additional heat if the wood stove is not enough on its own.

If additional heat is required, place a warm brick wrapped in a towel within the brooder. This concept works best when the brooder is placed next to a wood-burning stove, so that the chicks receive heat from both inside and outside of their brooder.

When choosing an alternate heat source to brood baby chicks, it’s important to remember to maintain the proper temperature requirements. Radiant heat sources do not heat the entire brooder area and are intended for indoor use only in an area where the ambient room temperature remains above 50 degrees (F).

Aluminum bubble wrap can be used to mimic a broody hen. In order for the aluminum brooder to be efficient, it must be placed next to a heat source. Consider using an aluminum brooder next to a wood stove, or placing it in the sun on warmer days.

The following steps must be taken before adding your aluminum brooder to the larger brooder box:

Boiling water can be added to many containers such as water jugs, liter water bottles, and even large coffee containers. Keep in mind, boiling water cools completely in about 1 hour and 15 minutes. This means the hot water bottles must be replaced quite often throughout the day and night. 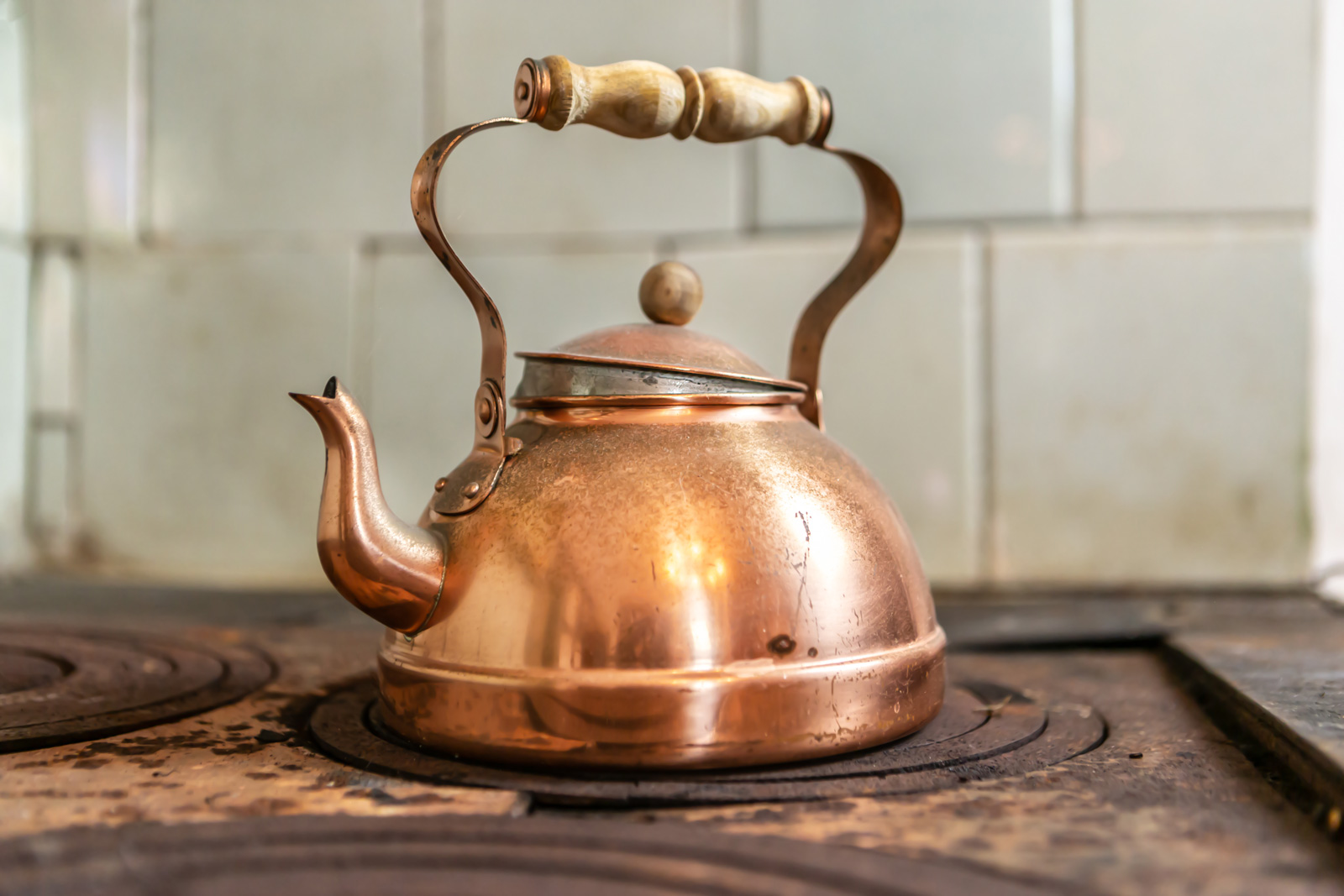 Is this method practical and is it safe? Not really, but it is an option if you are brooding chicks off-grid and have nothing else available. The method is relatively simple and requires very few supplies, all of which you’ll more than likely have on hand:

The method for building a hot coal brooder is even simpler:

Much like the hot water bottle method, this method will require a lot of your attention, especially throughout the night. 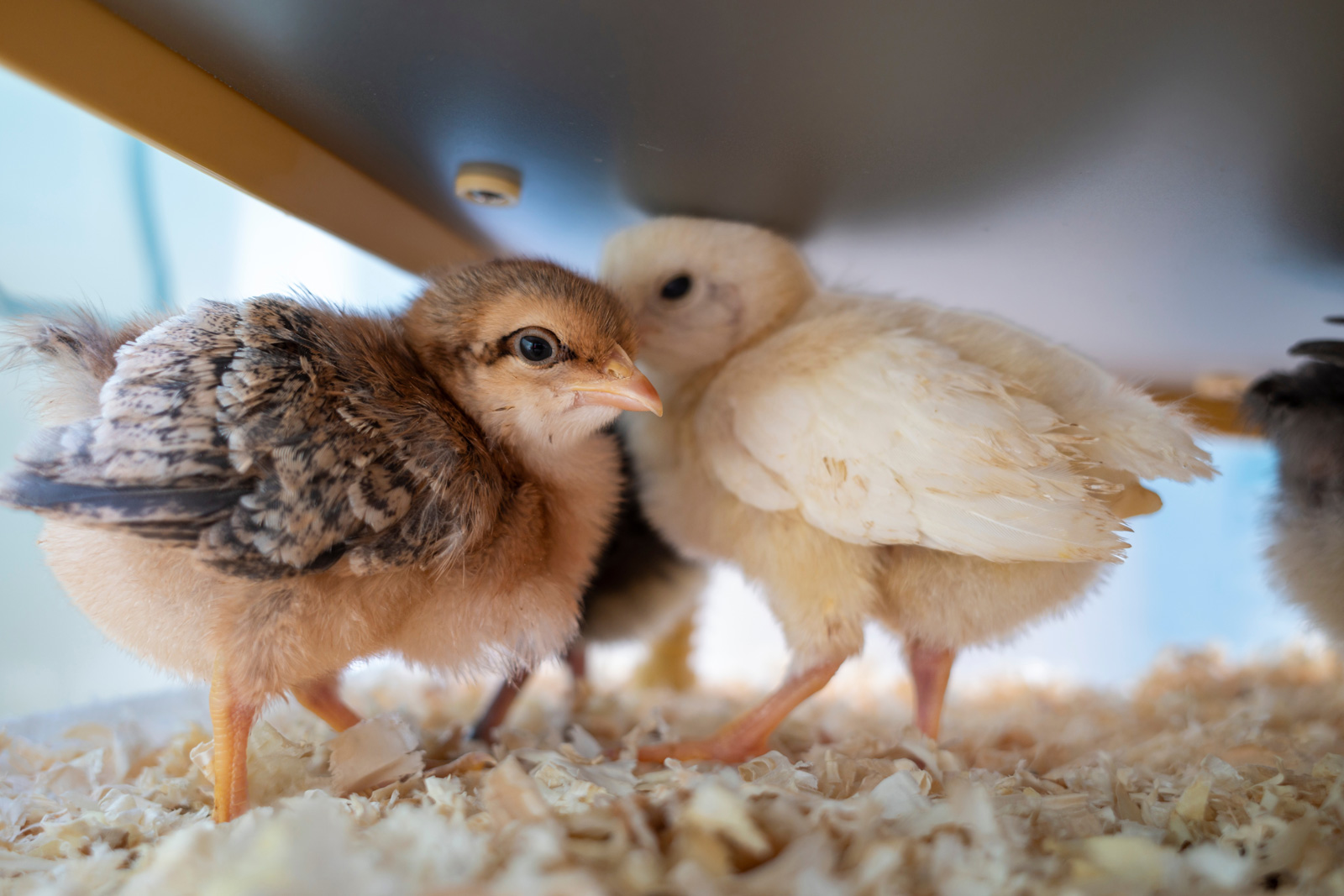 8. Try a Brinsea EcoGlow or Other Brand Radiant Heat Brooder

EcoGlow draws less wattage than a traditional infrared heat light. However, the EcoGlow will require electricity in order to work. Luckily, those living off-grid typically have a generator or some sort of solar power on their homestead.

Placing chicks into a smaller brooder forces chicks to remain close together, utilizing their body heat to warm the brooder. However, this method must be monitored closely to prevent issues such as coccidiosis in chicks. If you’re anything like me, you use a large to extra large poultry brooder. Make sure to section off the unused brooder space with scrap plywood, helping the chicks to remain in a smaller space until more room is needed.

Deep Litter in the Brooder — Some people may suggest trying the deep litter method for a bit of added heat, but I caution against doing that in a brooder. There are simply too many things that can go wrong with this method if the chicks aren’t kept directly on a dirt floor. Dust builds up quickly when utilizing a deep litter method. This can quickly lead to respiratory issues in chicks. This method can also harbor quite a bit of bacteria, causing chicks with low immune systems to be overexposed to potential illness.

10. Order Chicks in Bulk, and in Warmer MonthsAnother means for generating heat within a brooder is to order chicks in bulk. The more little bodies in a brooder, the more heat they will generate. Keep in mind, each chick will need roughly 7 square inches of space within the brooder. It is also wise to place your chick orders during warmer months when you are brooding off-grid — even in Summer months, chicks need heat and warmth and you’ll need supplemental heat to keep the brooder warm both day and night.

If you are not fully prepared to brood baby chicks off-grid, there are several ways that you can still enjoy poultry on your homestead. Instead, you can consider the following options.

To the average chicken keeper, this is not an option. There is an excitement in raising newly hatched chicks and watching them mature to egg layers. For many, raising chicks fosters a connection to their food source, and gives a sense of sustainability for many years to come.

With that said, if you are an off-grid individual who does not want the hassle of brooding chicks and considering their heat requirements, this is the best option. As an added bonus, those who opt to incorporate started pullets instead of chicks will receive eggs much sooner.

I would also encourage off-grid individuals to consider raising ducks instead of chicks. Waterfowl need to maintain the same brooder temperature as chicks, but once the temperature within the brooder reaches 70 degrees, a heat source is no longer required. Chicks often require a heat source for roughly 3 to 4 weeks longer than ducks.

Ducks are also a much hardier bird than chickens. They tend to tolerate colder temperatures well, and they are less prone to illnesses.

As you can tell, keeping chicks warm in an off-grid setting is actually quite simple once you find the source, or multiple sources, of heat that work best for your homestead. These little feathered dinosaurs rely on you to keep them warm, but you will be rewarded for all of your diligence when your hens lay their first eggs. 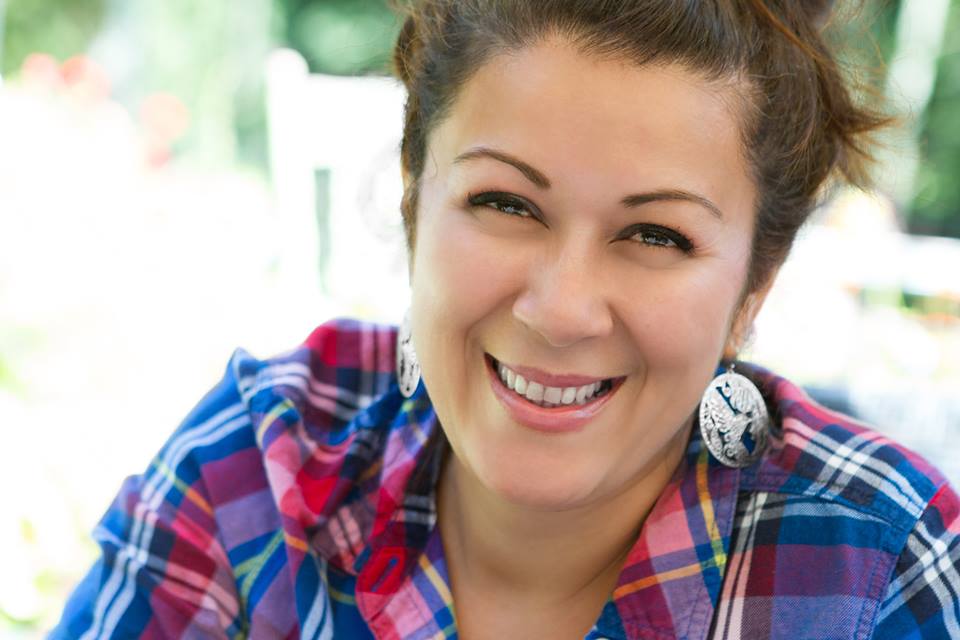 Ann Accetta-Scott is a homesteader in Tennessee raising poultry, goats, cows and rabbits. She is an educator, and encourages those who are seeking to live a more sustainable lifestyle. Ann is also the face behind the website A Farm Girl in the Making and author of The Farm Girl's Guide to Preserving the Harvest.