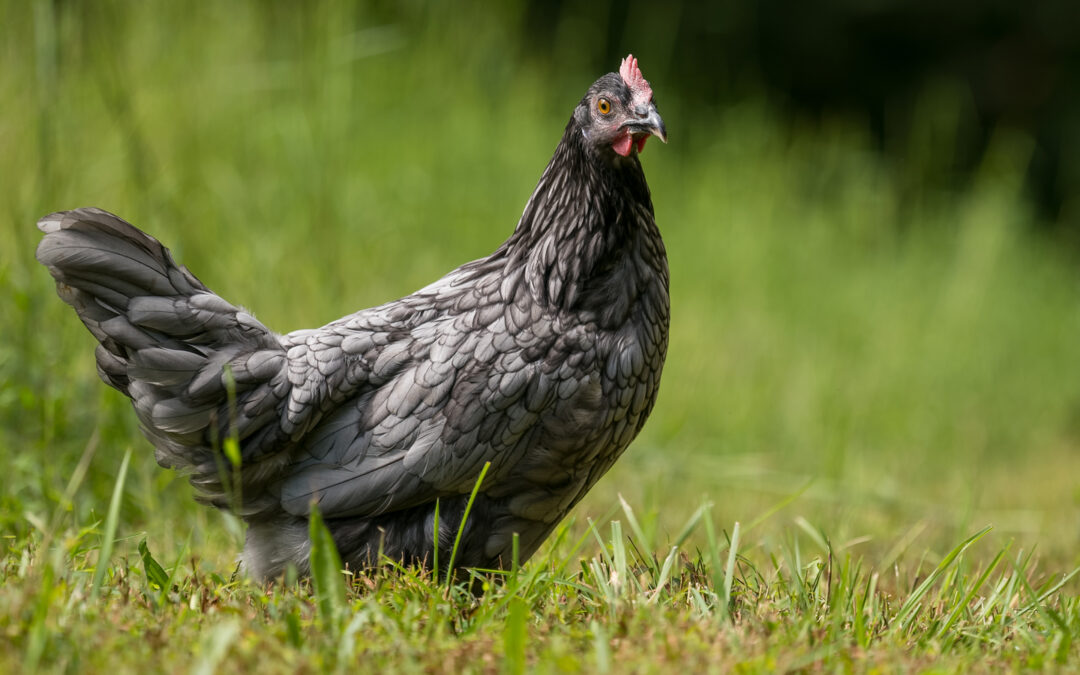 The Andalusian is a bird for the true chicken connoisseur. They are stunningly beautiful, outgoing and intelligent, curious and energetic, and zesty enough to keep you on your toes. This hardy Heritage breed is very good at several different jobs. They’re excellent layers, foragers, make outstanding show chickens, and they’re some of the best entertainment around! (And…did we mention how beautiful they are?)

Andalusians are medium bodied birds with long legs and an elegant, almost gamey appearance. Hens weigh an average of 5-5.5 lbs., while roosters weigh around 7 lbs. They have slate blue legs and feet, white earlobes, large straight combs, moderate sized wattles, and upright tails. Their APA accepted color variety is blue, but because of their color genetics, black, white, and splash offspring are also produced. However, only Blue Andaluisans can be exhibited in APA shows. The Blue Andalusian has beautiful blue gray feathering with darker blue lacing and a darker head. Roosters are very handsome with black hackle and saddle feathers over their blue bodies.

The Andalusian is considered a rare breed world-wide. In the US, The Livestock Conservancy has placed the Andalusian in the threatened category of the Conservation Priority List. 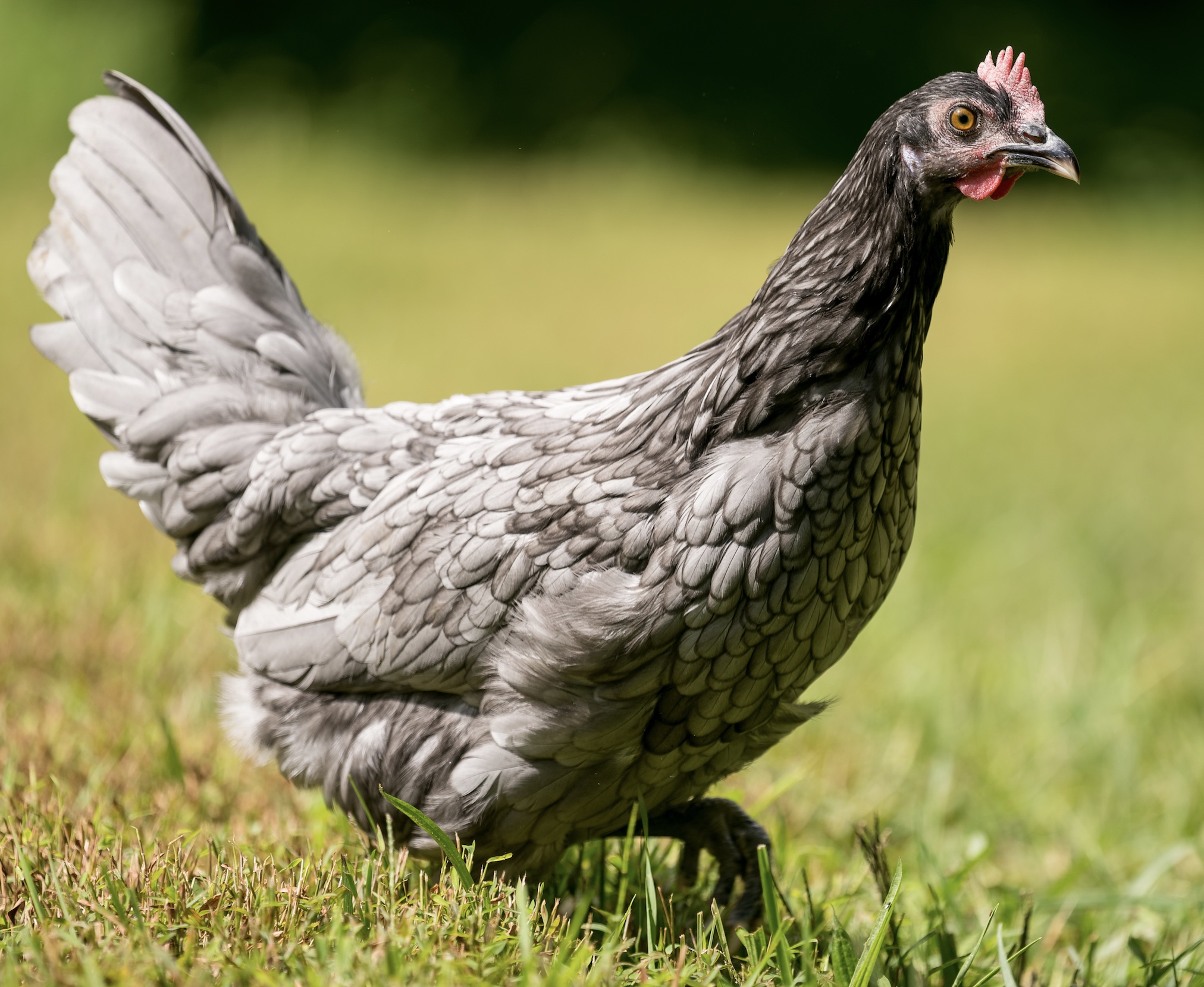 Andalusia, where this breed was developed, is the southernmost territory in Spain. It’s a beautiful area with miles of farmland, Mediterranean beaches, and Moorish architecture. It’s a fitting backdrop for such a gorgeous bird.

The early history of this chicken is not easy to find. A historian fluent in Spanish could spend months in Spain trying to track down mentions of the Andalusian and uncover their past. For our friends in the UK, the Andalusian enters their history around 1845. There were three early importations of Andalusians into the UK that are documented in written sources.

In the US, we don’t have such clear records. Andalusians were present during the 1850s, and they did appear in the very first American Poultry Association Standard of Perfection in 1874. One of the obstacles to finding more about their early history in the US is the fact that they were often lumped in as a color variety of White Faced Black Spanish. (The New American Poultry Book, John Taggart, 1884.)

It is widely believed that one of the foundation breeds for the Andalusian is the Black Castilian, or Castellano Negra chicken. As the name implies, this is an all black breed of chicken that comes from central Spain. Their black coloration is important because it was integral to creating the blue genetics of the Andalusian. A black bird bred to a white bird who carries the blue diluting gene was necessary to form the Andalusian’s blue color and feather lacing. The gene for blue (Bl) will dilute black feathers if there is only one copy (heterozygous). A chicken with one black gene and one blue diluting gene results in a blue bird with dark laced feathers.

As with all other blue breeds, Andalusians do not breed entirely true to color. Blue Andalusians bred to other Blue Andalusians will produce about 50% blue (one copy of the Bl gene), while the other half will be a mix of black (no Bl gene, or gene is suppressed) and white and splash birds (two copies of the Bl gene). If you hatch Andalusian eggs, be prepared to find all of these colors in your incubator!

Like most of the Mediterranean breeds, Andalusian hens are very good layers. They produce about 200 large white eggs per year and very rarely go broody. If you want to breed your Andalusians, you’ll either need an incubator, or you’ll want to keep another breed with good broody hens to hatch the eggs.

If you’re looking for a heat hardy breed, the Andalusian fits the bill. However, they might need some cold protection in northern areas with very low temperatures. Their large combs and wattles are vulnerable to frostbite and frozen blood vessels, so you may want to keep a zero clearance panel heater on hand for extreme cold snaps. If you live in the American south, this is definitely a bird for you!

This is a breed that needs plenty of space. A very large enclosed run is ideal to protect them from predators, and to stop them from flying the coop. We choose to let our birds out for a few hours of supervised free range time most days. Our large runs give them enough space that they don’t engage in bad habits like feather picking, but they love their time out foraging. This is particularly important for Andalusians, as they can become bored bullies in small spaces without much mental stimulation.

Given the right environment, this breed can flourish on a homestead. They’ll fill your kitchen with lots of eggs, and will happily turn over your compost or clean up your winter garden. They make an excellent addition to a mixed flock that is already made up of energetic breeds and other Mediterranean birds. Andalusians have been popular show birds since the advent of poultry shows, making them a great option for older kids showing chickens in 4H or FFA. 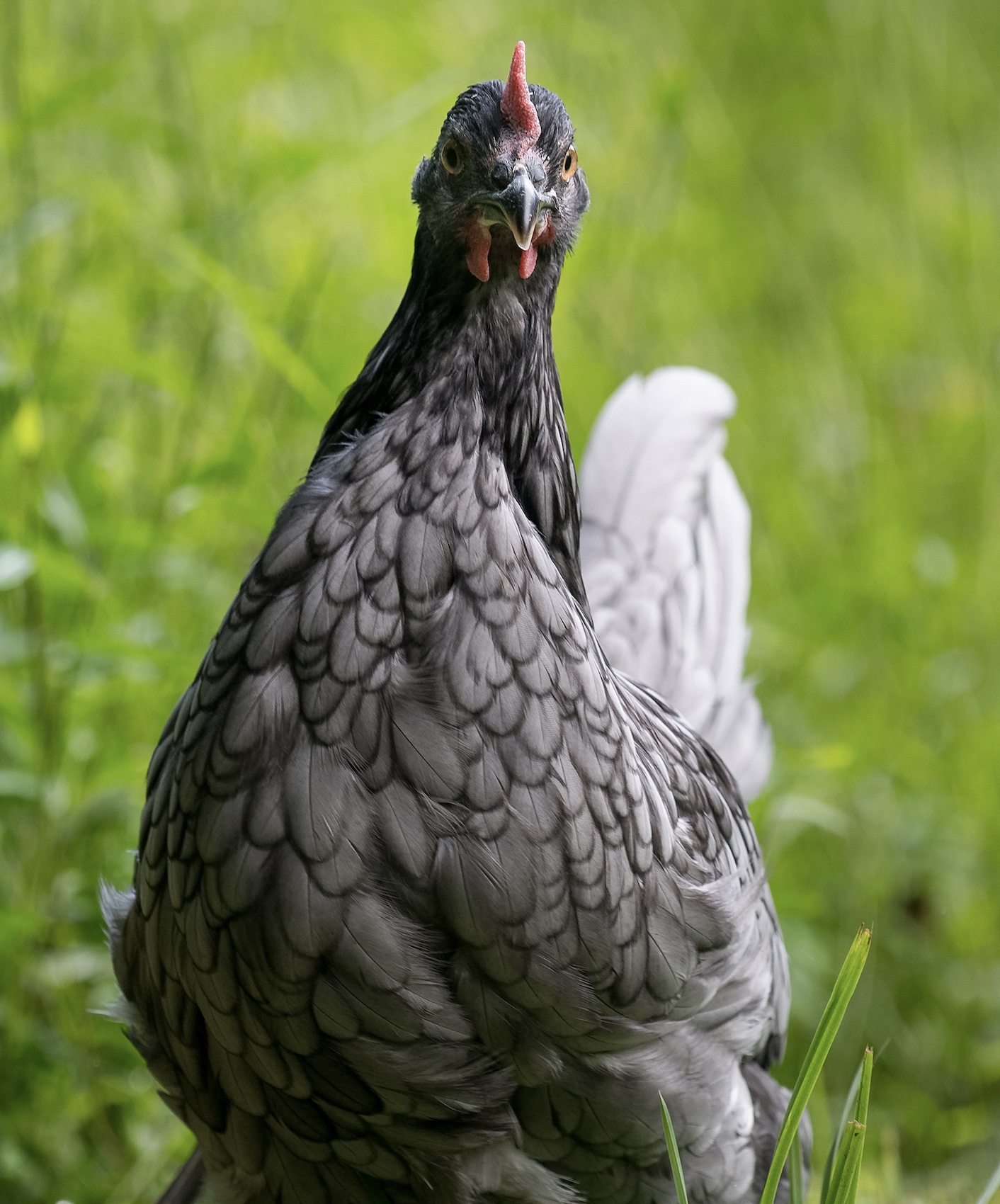 This little bird is packed full of inquisitive personality. They’re very friendly, curious, and social, but they do love their independence. They like to hang out with their people, but not all of them appreciate a cuddle. This is a highly individual trait. Andalusians are very smart, so plenty of space to scratch and forage is important, and boredom busters in their run are also a necessity. If you can meet their needs, they’ll pay you back many times over. And if you enjoy photographing your birds, keeping beautiful Andalusians means that you won’t have to look too far for your next Chicken Super Model. 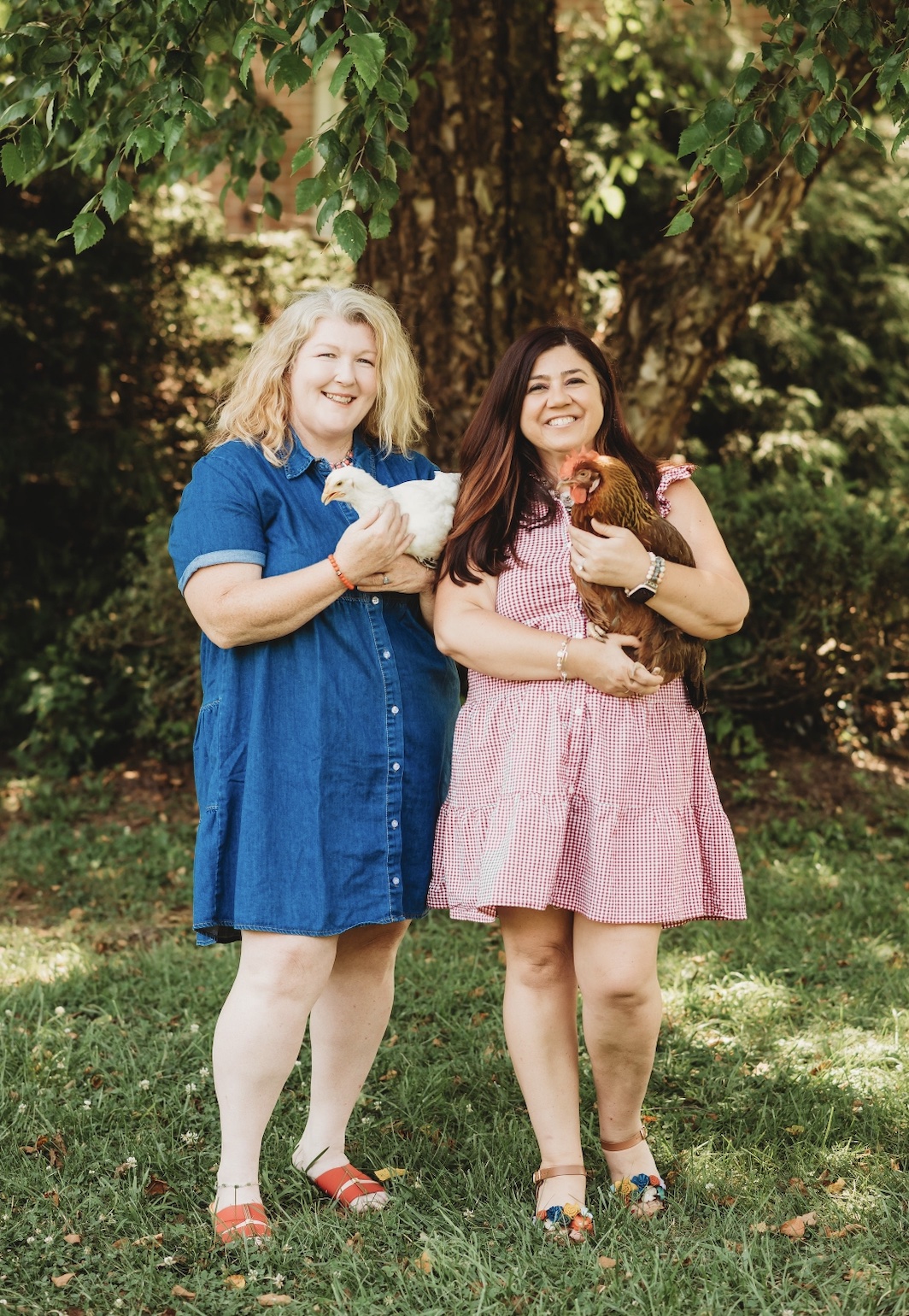 Holly Callahan-Kasmala grew up as a 4-H kid on a small horse farm. She has been keeping chickens for more than 20 years, and is passionate about Heritage chickens and helping people find the right breed for their needs. Holly has an MA in History, and is a long-time fiber artist/teacher. In addition to keeping Heritage breed chickens and rare breed sheep, she also grows heirloom cotton, dye plants, and all kinds of heirloom vegetables, fruit, and flowers on her small Maryland farm. She is the creator and co-host of Coffee with the Chicken Ladies Podcast.

Chrisie DiCarlo is a retired veterinary technician with a passion for helping people care for their poultry. During her 15 years in the field, she managed a technical trauma nursing care team in a busy urban veterinary hospital ER. She gave up her career to be a stay-at-home mom to her two amazing daughters. Chrisie has been keeping chickens for more than 7 years. She also loves growing herbs, fruit, and flowers on her small Maryland farm. She is the creator and co-host of Coffee with the Chicken Ladies Podcast.

Catch up on episodes of Coffee with the Chicken Ladies Podcast, stay up to date on their website, and follow along on social media.

All photos in this post are courtesy of Holly Callahan-Kasmala and Chrisie DiCarlo.

Our Andalusian chicks came from Murray McMurray Hatchery, and yours can, too! Their Heritage Andalusian lines have been carefully bred and selected for decades.

If you want to continue learning more about this special breed, check out Episode 97 of the podcast, Coffee with the Chicken Ladies.